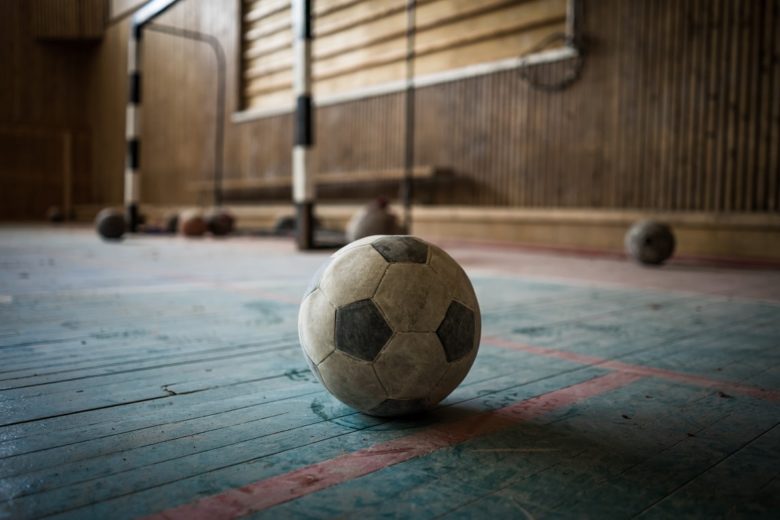 Every athlete is familiar with the phrase “Coach Watching.”

Sometimes you just want to coast through life without putting in any effort.

I played soccer in high school.

Growing up soccer was fun. There were rec leagues and pizza parties. You basically hung out with your friends and kicked a ball around. Sometimes the ball would find the net and you’d cheer.

But as soon as you enter high school, soccer turns into a nightmare.

Soccer is hard. Practicing every day after school is hard. Training in the scorching August heat in double-training sessions is the definition of hard.

My biggest problem was running.

For some reason, high school coaches believe whatever team is in the best shape will win the game.

Why this logic reigns – I don’t know – other than no one knows how to really play this sport in America to begin with, so we may as well run.

And to this day, I get PTSD from two simple trigger-words: “Jonesy” and “Brazilian Circuit.” (Shudder…)

A Jonesy is straight up running and sprinting.

It’s 5 laps around the perimeter of a soccer field, adding more sprints every time.

The fifth lap is impossible. Inevitably there’s some track star on every team who can accomplish this feat, but everyone else is sucking wind – and most likely, you’re walking the last lap.

The simple trick to survive, however, is to watch the coach.

But as soon as the coach’s attention is on you, you don’t want to be caught dead walking, so you run (or waddle).

A Brazilian Circuit, on the other hand, is a station-based exercise.

Each station is a cruel torture device like tossing medicine balls, pushups, sit-ups, leg lifts, dribbling or shooting drills. There’s an entire buffet of cruel exercises to choose from. Then after a couple minutes the coach blows a whistle and you trade stations. You do this forever, until you die.

My first introduction to a Brazilian Circuit was on a special Saturday training session (ugh) with the Girl’s Varsity team.

Why anyone thought mixing the boys and girls teams in a training exercise was a good idea, I’ll never know – except to prove the girls could keep up with the boys?

After 20 minutes, everyone knew that was dumb.

The girls were dropping like flies. They were puking, being carted off the field, and the coach was hiding them in his car. It was like a scene from a horrible war movie. Bodies were everywhere.

Thankfully though, I had the best partner in the world. She was a coach watching superstar.

As the coaches were resuscitating a nearly-dead girl, my partner grabbed my arm and said, “Stop, no one’s watching.”

I was in mid-pushup and my arms were killing me. It felt like fire ants gobbling up my chest. I was thankful for the reprieve.

I wasn’t too prideful to call it quits either. With her on the lookout, I felt entirely at peace to lay prone on the grass.

I needed a break. I was about to die.

She whispered to me, “I can’t do this anymore. I’m going to pass out.”

Yeah, man. Me too. But I wasn’t going to admit that. Gladly though, it was my new mission to make sure my partner survived.

The coaches returned and blew the whistle once more. It was time to change stations.

We had to grab the medicine balls and do some dumb medicine ball exercise. I was so exhausted at this point, I couldn’t even remember how the station worked.

The boys were supposed to use the 10-pound ball, while the girls used the 5-pound one. Instead, my partner swiftly handed me the lighter girl ball, while she picked up a soccer ball (practically weightless).

I marveled at her coach watching ways. I had been given a gift from God and partnered with a wizard. She didn’t want to do these exercises any more than I did.

But she was already seasoned, prepared for her coach, and his insane exercise antics.

Looking around, everyone else was in similar pain.

The track-star-ninja guy was off on his own gladly firing off rounds of leg lifts – he had already destroyed his partner and she was nowhere to be found – but everyone else was moseying around, heads on a swivel, watching what the coaches were up too.

No one made eye contact with each other, as no one would admit how tired they were, but everyone was exhausted.

Eventually, it was time to call it quits. Finally, our coaches returned and let us finish.

It was supposed to be a 2-hour Brazilian Circuit, but we barely cracked the first hour.

The girls went home. They were dismissed to lick their wounds.

The guys hung out for a while and pretended to scrimmage. We couldn’t possibly waste a perfectly good day of practice…

But all our bodies hurt and we wandered around the field like zombies. We hoped our coach would disappear to McDonald’s and get a burger so we could finally sit down.

We just couldn’t do it anymore. We were done.