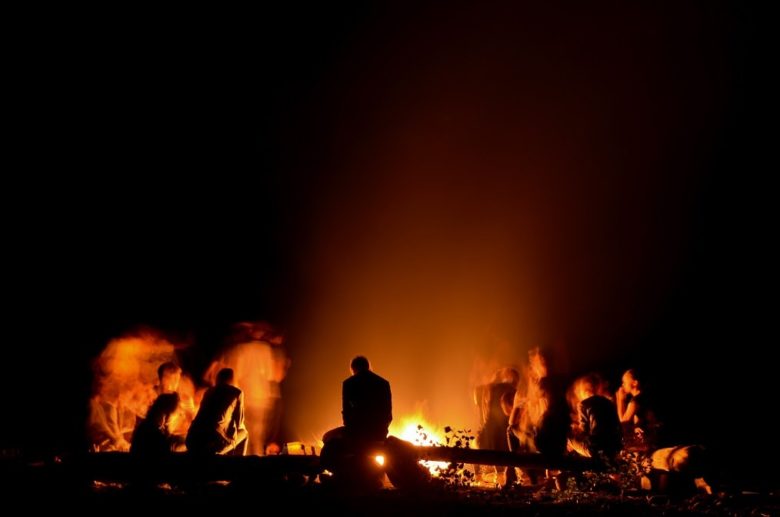 I don’t like the bugs, the cold, the rain, and especially sleeping on the ground – give me a nice, warm hotel room any day of the week.

But what freaks me out most about camping, are the ghost stories.

My dad used to gather all the little children around the campfire, then begin to tell the Tale of Three Fingered Willy.

Three Fingered Willy was a man, named Willy, who had three fingers on his left hand. My dad would display this in claw-like fashion as Willy when about his creeping ways.

Willy lost his ring and pinky fingers in a boating accident, or in a machine shop accident, or from getting chopped by a hatchet from some pesky kids.

However Willy lost his fingers, it always changed. It was like Willy was on a Choose Your Own Adventure story, but the one thing Willy desperately wanted, was REVENGE!!!

Ahhhh! Then dad would attack us with the three-finger claw again. Willy walked with a hunch too, like the Hunchback of Notre Dame.

He was a creepy dude.

Willy lived in the woods. He was a hermit.

And whatever campsite we were at, that happened to be the same exact woods where Willy was last seen.

Ahhhhh! What are the chances? We need to get out of here.

So dad would finish the story and properly freak us out.

Then, “Goodnight everyone, but beware of Three Fingered Willy. Buwahahahaa!!!”

And dad would leave to his own tent.

Us little kids would huddle around inside the little kid tent and stay wide awake all night long.

We’d all go quiet and listen for more sounds. Then silence.

One time too, from outside, someone ran their hand across the latex wall. Oh. My. God. I’m never going camping again in my entire life.

The next morning we asked him. Dad promised it wasn’t him. I sincerely do hope it was him. Otherwise there’s some pedophile wandering around campsites in New Hampshire – Or, it’s Three Fingered Willy!!!

The strange part was, we’d beg for these stories.

Fine. So he’d sit down, tired after cooking dinner, assembling the tent, blowing up the mattress, and all the extra work that goes into camping.

And he’d launch right into the story, with renewed vigor, and play the role of Three Fingered Willy.

Sometimes the claw hand would pop out of his chest too – like that scene in Alien – and devour a little kid. Gross.

But then we’d cheer with excitement.

It didn’t feel like a proper camping trip until the tale had been told.

Granted, the tale of Three Fingered Willy became the best kind of babysitter.

We didn’t dare leave our tent at night – refusing to use the restroom, risking our exploding bladders – and we never dared wander too far in the woods either, because, “What was that behind the raspberry bush? It just moved. Ahhhh!” And run back to safety.

If we had Santa to be afraid on in the winter – he knows if you’ve been bad or good, so be good for goodness sake – then Willy was our mystical guardian in the summer.

We were always on our best behavior and on diligent lookout for Willy.

Because, quite frankly, we didn’t want to die.