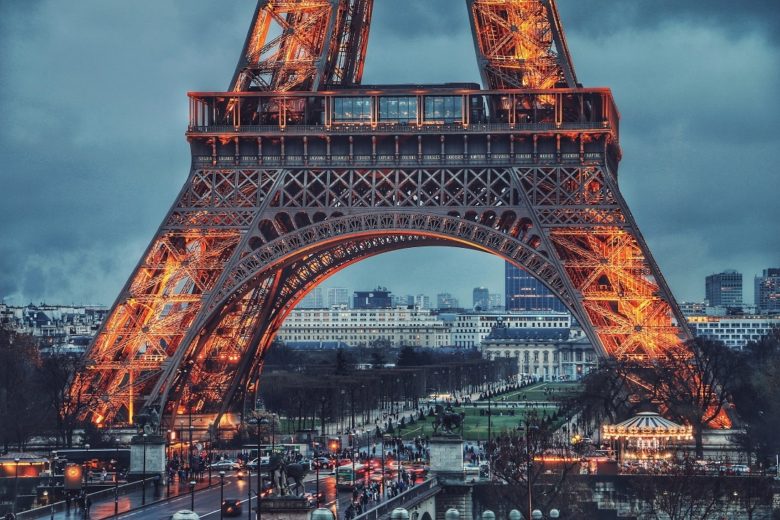 I walked into the street in England – and WHAM! – a mini cooper buzzed by me, nearly knocking me on my butt.

I was literally a millimeter from death.

My friend yanked me back to the curb.

He was like, “Whoa, dude. Cars have the right-of-way in England.”

Nice. That would have been excellent to know BEFORE I set foot on British soil.

Like holy crap, that should be a PSA announcement on the plane flying in:

“Where’s this plane from, America, ok, let’s tell them not to walk in the street.”

We got robbed outside the Notre Dame cathedral.

And it was hysterical. He tossed handfuls of breadcrumbs, and stood with arms outstretched like a scarecrow. The birds went nuts. They climbed all over him. It was the funniest thing I had ever seen. I laughed very hard.

Then we were tapped on our shoulder by the sweetest little French girl I had ever seen.

“I lost my passport and don’t have any money to fly home. Can you spare $20?”

My immediate answer, “No.”

This was obviously a scam. Asking for help from American’s outside of a tourist attraction isn’t exactly the first step I’d take in a similar situation.

My friend is nicer than me though, and he gave her the money.

“Can I have some more?” She asked. “I really need help and flights are expensive.”

As we walked away, the girl approached another tourist enamored with the pigeon man’s antics.

Were they working together? They had to be. What a brilliant way to single out tourists willing to help.

Make them happy, then stick ‘em with a cry for help. Strange, but effective.

“If anyone bumps into you now, make sure you have your hand on your wallet,” I said. We were obviously in the epicenter of thieves and had to be vigilant.

A bump-n-run mugging wasn’t out of the question, especially since we had revealed where our wallets were hidden.

Thankfully, we escaped without incident.

While in Paris, I was tired of eating their crappy food and ordering mystery items off French menus.

Shut up. You don’t know nothing.

England’s cool because it’s still English, with a few foreign customs to make it interesting. Even Italy isn’t so bad, people are nice enough to speak English.

But once you get to France, they’re like, “Forget you, you’re in France now. Speak our language or die.”

I was sick of their snarky attitude so I went to a KFC, Kentucky Fried Chicken – to get a proper American meal.

But you guessed it, the entire menu was in French.

“What? I don’t speak French. I just want the number one meal. That one,” I pointed to the menu.

She spoke deep and long French back to me, like she was reading a novel.

“Listen, I have no idea what’s going on here. All I want is some chicken. Here’s some money. Just give me whatever. I don’t care.”

She spoke more. Asked more questions, and waited for my reply. With a stupid smirk on her face.

Was this a joke? I’m nearly certain everyone in France speaks passable English. They just refuse to do it. Bunch of jerks. Geez.

So I shrugged me shoulders and waited. I hoped she would just take my money and give me some food – because I KNOW she understood what I said and was being difficult about it.

She gave up on me, turned around, and collected a basket full of chicken tenders, fries, and a Coke.

“Thank you,” I said, genuinely appreciative for the food. “And I know you understand what Thank You means too.” And walked away.

“Merci beaucoup,” she said to me.

Whatever. At least I didn’t need to starve again, or rely on another baguette.

#1. Eifel Tower is stupid and over rated. It’s just the tallest building in the area. Not interesting.

#3. The Louvre is miserable. You’ll spend 2 hours waiting for tickets. Then wait another 2 hours in a specific line for the Mona Lisa – which isn’t anything special and looks like a fake poster (like they’d really let you see the real thing, come on…) Then wander around all day looking at the same art from back home. Dumb.

#4. The miniature statue of liberty in the Seine River is the coolest thing in Paris, because come on, America, right? And there’s no line. The French think it’s dumb.

At a corporate dinner, I got in an argument with a waiter.

“Right, but what’s the grape variety?”

Really? It’s red? Are you a moron? Is this your first day on the job? What kind of Mickey-Mouse-Operation is this? Where’s your boss?

I figured he must be new – or a jerk – so I gave him the benefit of the doubt.

I grabbed it out of his hand and inspected the label for myself.

It was from Bordeaux-blah-blahdy-blah – I had no idea what it said. I flipped it over and it read more of the same. All in French. All indecipherable.

I have no idea what it was. It tasted like Pinot Noir. And not much to write home about.

Why did everyone rave about French wine? It made no sense.

The following morning we had a wine tasting at 10 AM. I didn’t want to drink wine that early in the morning, but when you’re in France, and are offered a wine tasting, you go.

Thankfully, the French host was nice. He explained why the French are snobs about their wine.

“Because,” he explained, “the Americans have bastardized the wine industry and made it into a marketing machine.”

The French only have two varieties of wine – red and white – because literally that’s the only two types you can make – and rosé, and sparkling, but that’s different.

So each vineyard makes their version of red and white wine, using whatever grape. And each vineyard, with favorites like Bordeaux or Burgundy, has a unique flavor, thanks to soil and aging and whatever.

That’s all I know. That’s like the tip of my wine-iceberg.

But the American’s have taken the wine making industry to a whole new level, mixing blends and focusing on different grape varieties. So you get things like Cabernet Sauvignon and Merlot, with nice artificial smoky flavors – a big huge marketing machine to crank out distinct and unique tastes – yum.

But my biggest take away, the wine guy said this:

“The French hate the American wine industry. They refuse to acknowledge the grape variety, only ever referring to the vineyard it came from, or red or white.”

Ha! I knew it. That waiter was being a jerk.