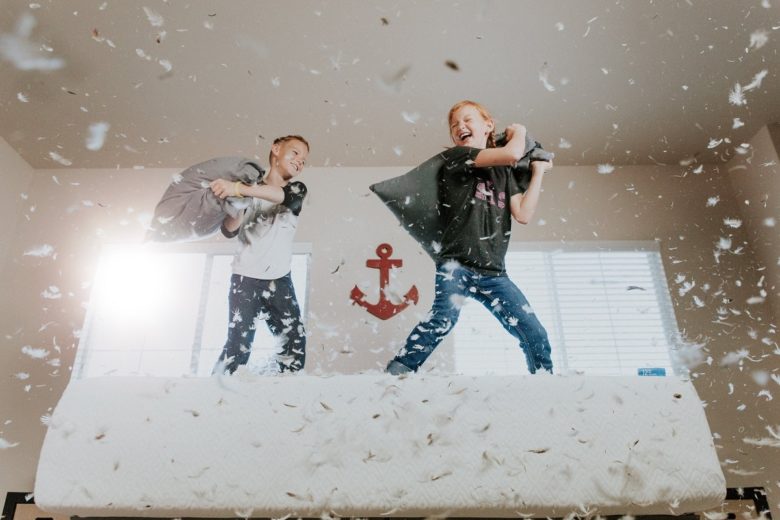 [Editor’s Note – I wrote this article weeks ago. But in the aftermath of the horrible school shooting in Florida, I decided to still publish it. Boys, violence, guns – It’s a conversation that needs debating. How we raise our young men shouldn’t be overlooked.]

A man attacked me.

I probably deserved it. Because in the winter, I used to chuck snowballs at cars.

The boring cars would keep driving. Like seriously, how? We just lobed 30 snowballs at your car and you’re going to keep driving and pretend like nothing happened?

The best cars were the ones who’d stop and get mad, yell at us, and honk their horn hysterically like notifying a listening adult – but all that meant was we won. We beat you and made you enter our world. Now you’re ours!

Once, a dude in a sedan rolled down his window and started throwing things back at us.

WHOA! DUCK! We yelled and screamed and dove for cover behind the snowbank. “What was that?”

My friend got smacked, right in the head. PLOW! We thought his brain exploded and died.

But it was only snow.

That dude in the sedan, literally took the time to pull over, pack some snowballs of his own, and turn around to launch a barrage of bullets back at us.

That guy was awesome – whoever he was.

We were always fighting and killing things.

My favorite game was Nerf War.

My younger brother would effectively be “king of the hill” and guard the top of the stairs. He had a gigantic Nerf gatling gun which could fire off 20 bullets instantly.

And even though he was younger and smaller, he always had the advantage – that gun was ridiculously powerful.

But I wasn’t entirely out-matched – I had a sniper riffle to take crack-shots at him – or when that ran out of ammo, I’d switch to the deadly powerful bow and arrow.

It was my job then, at the bottom of the stairs, to sneak to the top, or to shoot him in the process.

The rules of the game would often change mid-campaign. Like we’d start out by saying if you got shot it meant you died, and the other person won.

But inevitably, that wouldn’t feel fair to whoever had lost, so the rule would change to three hits and you’re dead – or the damaged body part would be lost.

Get hit in the right arm, and you lost function of that arm – that sort of thing.

And then if I still couldn’t win, I’d call my friend to come over and we’d gang up against my brother. That at least evened the odds, because it was always so difficult to beat him.

My little brother was a beast at Nerf War, and it took all my creative energy to devise a way to kill him.

We’d try and flank him – sneak up the laundry chute on the other side of the house – then surprise attack him from the side – totally unexpected.

Or one of us would draw his fire, and take hits for the team, while the other one ran up the stairs like a kamikaze attack.

It was the hardest game we ever played. But it was also the most fun, as each round lasted for hours.

I’m sure it drove my mom crazy too. She’d just shake her head at the insanity of the little boys creating total war on the staircase.

And of course there’d always be a temporary cease-fire when mom needed to go upstairs – inevitably I’d try and use it to my advantage and sneak up behind her – there was technically no way to cheat at Nerf War – because there are no rules in war.

At the end of the battle, not matter which side won or lost – but I normally lost – we’d evaluate the battle field and laugh at the carnage in our wake. The sheer volume of bullets and shrapnel strewn about our house felt like the hardwood floor had been covered in a new Styrofoam carpet. You needed to shuffle your feet to walk without tripping, and kick a wave of rubber bullets in your wake.

There’s the topic of gender specific toys – should you give a boy a truck, and a girl a doll.

Or is it safe to let boys play with fake weapons – like Nerf guns?

I don’t know the answer to any of those questions. I had Nerf guns growing up. I turned out moderately well adjusted – I’m not some violent psychopath, except for the rare road-rage outburst – I don’t even own a real gun as an adult.

But I know this: With or without those guns, I was going to find a way to kill something.

I’ve talked about my affinity for playing with Legos wrong, and wanting them to engage in mortal combat.

And man, if there are woods around your house, those trees are guaranteed to become forts, and the branches growing off them into swords – and probably with intentionally sharpened ends, for killing stuff, obviously.

The forest in the back of my house was like a portal to a fantasy world. As soon as you stepped into the shadow of the woods, you were transported somewhere else.

Cops and robbers, dungeons and dragons, ninjas and karate killing time. Whatever. It was all awesome. The possibilities were endless in those woods.

And the stick swords we’d create were epic.

I found this long hairy branch, that inevitably had to be use as an elder wizard wand – it’s like something you’d see out of Harry Potter.

I played with that thing forever, and found its lost cousins, and gathered them all up. It felt like lost treasure on our property.

Come to find out, that was poison sumac, or something similar, and burst my skin into an itchy tumor ridden strawberry field. So that sucked.

My mom thinks I was allergic poison ivy – but I think it’s because I was wearing that stupid branch all over my body and using it like nunchucks – because it was ninja time.

But I didn’t care about the consequences – that branch was the best and needed to be owned.

Lately, we’ve been driving home, finding “guards” on patrol at our community gate.

There’s a gang of heavily armed boys, fully stocked in Nerf gear, holding up the palm of their hand like a police officer and shouting “stop.”

I’m sure their mom is annoyed with the rough-housing and war-antics and has kicked them out of the house – perfectly unaware they’re now terrorizing the entire community.

The best way to deter a little boy is to burst his fantasy bubble. Tell him it’s not real and he’ll go off and cry.

I thought how awesome it’d be to have weapons of our own, packed and ready in the car. Nerf weapons or water guns would be ideal.

Those boys would love it, to get a “drive by” shooting with a passing car.

But we don’t. We don’t want to encourage them. It’s already annoying that they’re out there as much as they are.

Besides, it’s a small community. I’m pretty sure they could find our car and enact revenge. I’d wake up to find our car egged, toilet papered, or a broken window, and that feels like too much effort to deal with.

Besides, I’m too old. And I’m done fighting.