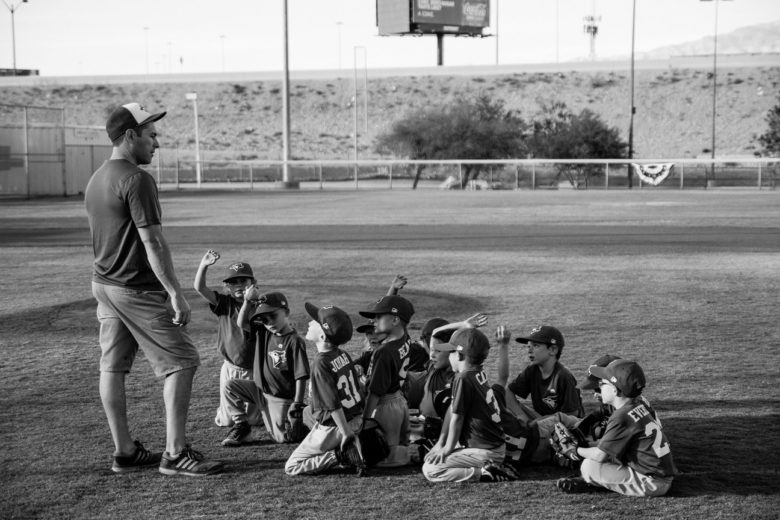 During tryouts for my high school baseball team, I realized everyone succeeded by cheating.

And it made me furious.

The first day of tryouts was nothing but running.

I knew this ahead of time. There had been a team meeting in February, as the coach told us not to bring a glove. That the first day of spring training we’d run.

That terrified me. I hated running.

I had already played soccer in the fall, and all we did was run.

I can’t even recognize what a soccer ball looks like any more – but running shoes, and sneakers – yeah, we’re pals.

The problem was, in soccer, I was always last. I sucked at running and hated it a lot.

One of our favorite soccer exercises was to go on a “tour.” A tour meant a “tour of the city.”

We’d lace up our running shoes and hit the pavement. And we’d run. We’d run until we died, then we hobbled back to the field.

Literally every time I was last. I couldn’t figure it out, or how to be better. Everyone was just better runners than me.

And once, I pulled my calf muscle.

It felt like someone took an ax to my leg and chopped it off. I couldn’t move it any more.

I stopped running, and fell away from the pack.

The assistant coach stopped with me, encouraged me, and begged me to keep running.

It wasn’t going to happen. I couldn’t move.

I had to walk 2 miles back to the field – and then my leg bruised into this huge purple spot to prove I wasn’t lying.

That hurt a lot.

So when baseball came around, I was determined to not be last.

I trained all winter. I went outside in the freezing weather and ran around in the snow.

I did laps around our house, up and down the driveway, and sprinting up hills.

It was a lot of hard work, and I put in the effort.

I was so determined not to be last any more – and I knew the obvious secret – to train, to practice, to just run.

Soccer-shape is like hardcore-marathon-running type shape. It means you can run forever and never lose your stride. It means running for days, with a smile on your face, and able to have a full conversation with a friend.

Anyone who’s played soccer competitively knows what I’m talking about – it’s being in shape on a psychotic level.

At the end of the fall, however, I had lost my soccer-shape body – even though I still wasn’t a great runner, it still made me stronger.

Sitting around all winter I had become sad and flabby.

Hitting the snowy slopes and running again was hard. I could feel it in my lungs and legs.

I had to try again, to get back into shape, before baseball tryouts began.

I didn’t want to be last ever again.

Well, if you’ve ever watch professional baseball, I don’t need to tell you that “being in baseball-shape” is not the same as “soccer-shape.”

Baseball is full of large men who can’t run, but will gladly smack homerun after homerun – think of “Big Papi” David Ortiz, or even Babe Ruth – there’s just some big dudes.

So, in the beginning of March, when baseball tryouts started, I stood happily outside in my running shoes, looking at my competition.

They weren’t in shape. I was going to leave them in the dust.

We took off running around the city on our 3 mile tour.

I was near the front of the pack in the beginning – as this is a good technique for staying in front – and inevitably the group thinned out as the miles past.

Somewhere around mile 2, the coach drove up and cheered me on.

“You’re doing great, kid. Keep it up,” he shouted to me out the window of his heated car. He was sucking on a donut and enjoying a hot coffee.

I gave him a thumbs up. I felt good, in shape, and like a rock star.

I had put in the hard work during the winter – when no one else was – and was already impressing the coach on day one.

It took me about 30 minutes to finish and I felt great.

I still had energy at the end and was able to finish at a light jog – not the walking that soccer had forced me to do and kicked my butt.

Rounding into the high school parking lot was the finish line.

There were 20 boys ahead of me – all upper classmen, and in-shape dudes.

I felt great. I was right in the middle of the pack, and here I was, a lowly freshman.

I got some high-fives from the guys as I finished. I felt amazing. I was well on my way to making the team and impressing the coach – I had finally figured out how to run.

Then, to my horror, the rest of the team stumbled in right behind me. Like immediately behind me.

Like the remaining 20 guys, all big and out of shape, had been right on my tail.

“What the heck?” I said. Where did they come from? I had smoked those guys. They were eating my dust after the first mile. It should have taken them another 30 minutes to finish, at least – if not an hour.

I imagined we’d be waiting around the parking lot, playing cards and bonding over hot cocoa and having a merry time.

I couldn’t believe my eyes.

“They cheated,” my new friend said to me. “They cut through a different block around the school. They probably only ran a mile, tops.”

I was beyond furious. My face burned red, as I wanted to scream, but couldn’t.

They had made me look bad. It made me look like I was close to the end – with the last place finishers – but I wasn’t.

I was at the front.

No one said anything. No one made a fuss.

There was whispering among the better runners, but what are you going to do? Cause a scene, start a fight? This was supposed to be a team after all, and we support each other.

I don’t even know if they coach knew. He had driven in his car, so he wasn’t about to be out there running. It’s not like he knew how long it took to run 3 miles around the city – he could barely walk himself.

Anyway, I felt good for my effort, and that’s all that really mattered.

The next day, however, was something entirely different.

In the winter, all the fields are covered in snow, so we’re forced to play in a parking lot. It’s dumb. That’s not baseball.

So, to warm up, the coach made us run 4 laps around a tiny city block – it would have totaled a mile – not too far.

But the better runners took off in a sprint, while the laggards struggled behind.

Again, I was up with the better runners, making good time.

And then we started lapping people. It was hysterical. These jerks were so slow and so out of shape. They couldn’t even run a mile. If this was soccer, they would have been cut, for sure. What a joke.

So I felt great again, now that I was doing well, especially at something I’m not good at.

And I was excited, knowing the slow morons who cheated yesterday would pay for their sins today.

The coach stood and watched from the parking lot. He could see us run the entire way.

I finished lap 3 and had just started my final lap 4, but I realized most people had stopped. I was in 10th place, but only two other guys were behind me. Where was everyone else? Why were they already standing around at the finish line?

“Are you kidding me!?!” I screamed. How in the world was this happening? Again? I couldn’t believe it. This was the stupidest group of guys I had ever met.

I was with the better athletes, running hard, sucking the freezing cold wind in my chest. This wasn’t fun for anyone. No one wanted to be out there.

I finally finished that lap, pissed off beyond belief. It made it look like me and a few other guys had finished last.

As we came across the finish line, my friend laid into the rest of the team and let them have it.

“Hey you stupid morons. We lapped all of you. You only ran 3 laps.”

It turned into a big yelling match. But this had been pent up anger from the cheating the day before.

The coach didn’t know what to do. He was just like, “Well whatever, whoever needs to finish the last lap go do it.”

A few boys owned up to the mistake – and went out and ran some more – but most didn’t.

But I wasn’t last any more. No longer.

How was the coach supposed to know that I was a superstar? And had worked hard? And was determined to make the team?

I desperately wanted him to know who I was. I wanted him to be like, “Who’s that freshmen who’s keeping up with the varsity team? What’s his name?”

But he would never know.

Because I got cut.